Just 5 more days to participate in MMDL's Soft Tip Darts Survey.  If you've not done so, please click the following link and take just a few minutes out of your day to provide your feedback.

Please also forward this email to your team mates or other MMDL friends and encourage them to respond so we can get as much input as possible. 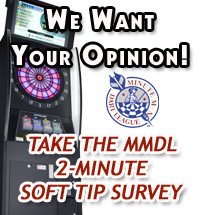 Have an opinion about soft tip darts?  Tell us.

To date we have collected 250 responses but would like more members to have an opportunity to relay their thoughts and opinions.  Attached is a summary of results we've collected so far and below you'll find a selection of comments that were submitted by your peers.

Join the "Darts in New England" Facebook Group to stay on top of all local tournaments and competitions. 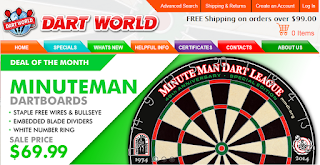 * MMDL BoD meetings are open to the public. If you wish to attend an MMDL Board Meeting, please contact your Area Director to make sure there are no last minute changes to the meeting time and location, and make note if you want to address the board with an issue to add to the meeting agenda.

--
--
You received this message because you are subscribed to the Google
Groups "MMDL News and Announcements" group.
To unsubscribe from this group, send email to
mmdl-news-and-announcements+unsubscribe@googlegroups.com

---
You received this message because you are subscribed to the Google Groups "MMDL News and Announcements" group.
To unsubscribe from this group and stop receiving emails from it, send an email to mmdl-news-and-announcements+unsubscribe@googlegroups.com.
For more options, visit https://groups.google.com/d/optout.

Posted by MMDL Board of Directors at 11:25 AM